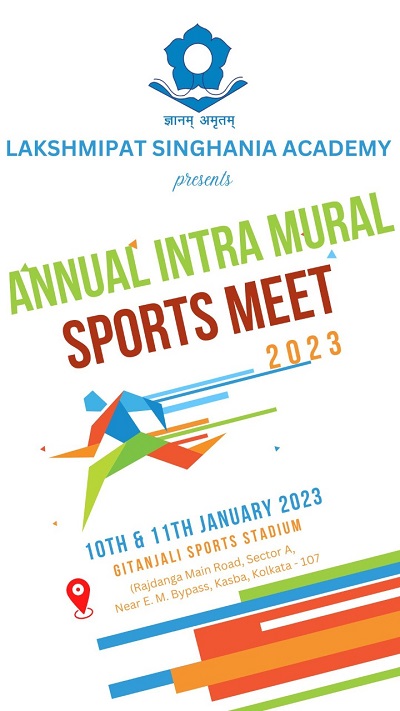 Lakshmipat Singhania Academy’s 25th Annual Intra-mural Sports was held with great fanfare on the 11th January, 2023, from 9:30 a.m at the Gitanjali Sports Stadium, Kasba. The day’s event was preceded by a day's rehearsal of the inauguration shows and the first couple of rounds of the various athletic events.

Ms. Dola Banerjee, Olympian and Arjuna Awardee Archer alongside Air Chief Marshall (Retd.) Arup Raha graced the occasion with their presence and declared the meet open after they were given a cordial welcome by the Academy students.

The welcome song by 45 students of the Academy set the mood for the day. The theme of the song was ‘Stand Up (for the champions)’, to boost the students’ courage and stamina.

The Opening March Past was a grand display of the four houses’ synchronised moves and discipline. The Sports Captain Vaibhav Gupta handed over the symbolic torch to the Chief Guest who declared the Sports Meet open. Ms Dola Banerjee, took her salute from the podium and presided over the oath-taking ceremony.

The program began with a colourful display by students of classes 1 to 5 celebrating the achievements of different Indian sports.

Various events for the children offered them a great opportunity to display their stamina on the sports field before a big gathering of parents and teachers. There were fun races for parents, ex – students and the support staff of the school too. Another highlight of the day were the races organised for the students of Hope Foundation and Behala Naboprayas.They enthusiastically took part in the 100 Mt sprint, as well as creative races like the obstacle and balance race. The Montessori toddlers were seen dressed up as eminent Indian personalities mostly freedom fighters following the Azaadi ka Amrit Mahotsav theme. The children ran towards their parents on the finishing line holding the placards of their character names. PSI students represented the seven sister states of North East India and PSII students were dressed as different crops while they depicted the Soil of india. .

Prizes were given away for every competitive event by the select group of parents who were specially invited to do the honours. A feeling of excitement and jubilation prevailed all through as the scores of the four houses went on climbing at their respective pace. Recurring announcements of the same made the air all the more electrifying. Eyes stayed glued to the scoreboard that stood at one lone corner of the field.

The day’s events came to reach a culmination when the results were declared. Agni bagged the prize for being the house with the best Spirit of Sports, Jal emerged as the winner for being the best marching squad, Vayu too did not lag behind, grabbing the recognition for the best decoration , however, Prithvi stole the day’s show by leaving the other three houses behind and being declared as the best performing house with a whopping score and a grand lead with 204, Vayu, Jal and Agni trailing- their positions, just as their names feature here. The best athletes’ names were declared too- Aryaman Chharia from Prithvi house and Aarushi Bhroota from Vayu House.The event came to a closure with a celebration of sorts with the school's Director, Mrs. Meena Kak congratulating the winners and all participants and also the faculty and staff of the entire school for having made the event a spectacular success.